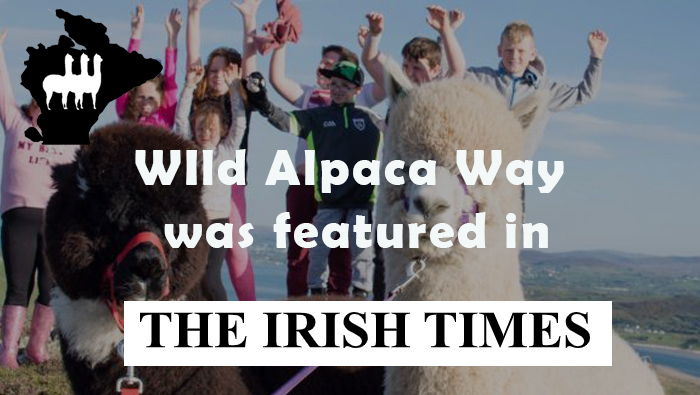 It’s the very last rock before Rockall. We were standing on Malin Head, with sea loughs Swilly and Foyle spread out either side in a sheep-spotted panorama, leaning into the northernmost tip of the Wild Atlantic Way.

This is the culmination of Donegal’s Inishowen peninsula and Ireland itself. Naturalist Robert Praeger of The Way That I Went defends its weather (only one degree different from Kerry, he swears), praises its “crumpling” rocks and calls Donegal the best county of all to walk in. “It’s like nowhere else . . . beauties of hill and dale, lake and rock, sea and bog, pasture and tillage, so intimately and closely interwoven that every turn opens new prospects.”

Praeger recommends hiking, or driving at only 10 mph by car. But if he were still around he’d recommend walking with an alpaca.

Add the Knockamany Bens cliffs, the dunes of Five Fingers strand, a vast supply of black and white lambs, plus an Andean alpaca under each armpit, and you’re in business.

Nearby is the Banba’s Crown lookout tower from 1805, with a popular local Banba Café van selling local homemade cakes and espressos to make the hair stand on Banba’s head and sustain all the international hikers who come here to view the Northern Lights.

In which case is Malin Head the 33rd inch of the 33rd county? “We always think that we’re the forgotten men of Ireland and we can’t understand why the rugged beauty of Inishowen stays so unenjoyed,” says sheep farmer John McGonagle.

When sheep lost their charms for them, John and his wife Patricia tried “glamping”: the glamorous version of camping with fine linens and gourmet food.

Ironically they were barred because Malin Head is an “area of outstanding natural beauty”, as signs say, and indeed it is.

But none say “Beware of Alpacas”, Malin’s latest attraction.

So the McGonagles thought up the Wild Alpaca Way.

I would be brazenly lying to you if I told you Malin was another Marbella and that there’s no wind. There’s wind alright of the bracing kind. Luckily you can lean on an alpaca now and vice versa. I leaned on Alpaca Mojo, who hummed as he leaned back.

With an alpaca on either side you’ll be toasty, with their deep, deep soft curly fleece. It’s hard not to ooh and ahh when you see their furry little knock-knees, long necks, stumpy tails. To burrow into an alpaca’s fleece is a curiously thrilling sensation. They are the world’s most absurdly cute animals, as well as the least complaining.

Two more pluses: they make their own toilets in the same spot and act as their own midwives.

All of which makes them perfect companions, says John. His three sons Danny, Aidan and Sean have taken to them.

There are 1,500 alpacas around Ireland now so we asked when John’s family fell in love with them.

John jokes: “First they reminded me of Santa Claus, and next day they reminded me of their owner – ha ha, no hair!” He’s joking about a mildly receding hairline and a recent shearing for his own Alpacas: Badger, Bounce, Chestnut, and Mojo. “It’s ideal for families in search of holiday activities outdoors.”

Danny and Patricia’s three sons find their own Alpacas funny: Aidan’s description of Bounce skipping and Mojo trying to spit (they can’t) is hilarious.

You can’t ride them either. After all, they were bred to protect flocks and withstand the snows and predators of the Andes at over 12,000 feet.

Malin Head is a picnic after the 12,000 feet-plus peaks and fastness of Peru and Bolivia.

John first read up on the Irish International Alpaca Association site, then contacted other farmers before deciding to launch his own Hiking the Head outfit.

One black (Badger) and one white (Bounce) were first to arrive, bought in from Tyrone. Then came two more “gelds”, Mojo and Chestnut.

Unlike llamas they don’t spit or bite, though they hum when contented in a low way: “Timid and cowardly too”.

The most they ever do to complain, add the brothers, is stick out a little black tongue and go “tsk, tsk”.

All of this makes them the perfect wild walking companion, unlikely to break into a gallop or go swimming in Swilly. They must be all the rage. Another outfit has come up with the Alpacas and Prosecco tour.
Here is the article on the Irish Times website